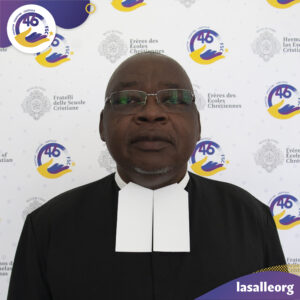 Brother Anatole DIRETENADJI was born on 2 May 1966. He made his perpetual vows in the Congregation of the Brothers of the Christian Schools on 29 December 2009. He has held various positions of responsibility in his District, before being appointed as Delegate of the Brother Superior General and in charge of the Delegation of Rwanda from 2014 to 2017. He was also Bursar of the Lasallian Region of Africa (RELAF) and Director of the Regional House from 2011 to 2017.

Brother Anatole was appointed Visitor of the District of Central Africa the first time in 2017, and re-appointed for a second term, from 2 July 2021 to 1 July 2025, by the previous Superior General, Brother Robert Schieler.