Beginning of the Novitiate – Arlep District

By: Communications Office of the Arlep District (Spain – Portugal)

On 1st October the Centro Arlep La Salle hosted the celebration of the initiation into religious life of Borja and Cristian, who were accompanied in this decisive step in their lives by family members, Brothers who have been significant in their personal history, Zone Animators in the District, Brothers and lay participants in the CEL (Program for Lasallian Studies), Brothers of the Centre’s Community, Brother José Román Pérez, Visitor, and the Brother Auxiliary Visitors.

The theme chosen by Cristian and Borja was “And he answered: I have been most zealous for the Lord, the God of hosts” (1 Kings 19:14), which reflects their personal journey, different in their particular stories, but already converging in the Postulancy which took place last year and in the attitude of listening and dialogue with the Lord, through the gentle breeze of his Spirit, which is shaping them vocationally to give themselves with passion to the evangelisation of children and the young.

The Eucharistic celebration, prepared in detail by the whole Novitiate Community, had its central moment in the dialogue of the two novices with the Provincial, in which they expressed their desire to follow Christ, consecrated as De La Salle Brothers, and their willingness to live these two privileged years of formation by fully experiencing the life of the Brother in all its dimensions.

After this, the Brother formators of the Novitiate gave them the three classic symbols which seal the institutional commitment to walk together in initial formation: the Bible so that they can study it and allow themselves to be enlightened by the light of the Word; the Cross as a saving force through the relationship with Jesus Christ and with those who suffer; and the Rule of Life which expresses the charism and attitude of the disciple of John Baptist de La Salle.

Brother Armin Luistro, Superior General of the Institute, was present at the presentation of the Rule, through a dedication with his signature and seal, personally expressing his desire to join each of the novices in the exciting journey of fraternity and wishing them to discover in the Novitiate the warm presence of God’s love.

After the ceremony, and after congratulating the novices, a fraternal meal was enjoyed which completed the celebration of this joyful feast. That evening the Novitiate was officially begun, which in reality had been started a month earlier by Brothers Eladio García, Pedro Alonso and Fernando González together with Borja Llamas and Cristian Díaz. These have been intense days of work to have the house ready and to get to know each other informally in everyday life. We dedicated some hours to drafting the community annual program and four days of retreat, animated by Brother Esteban de Vega, in preparation for the beginning of the Novitiate.

The predominant feeling, after this day, is one of gratitude for these beginnings, in which we have had the collaboration of many Brothers and Lay Lasallians who have helped us to place ourselves in this new environment. We feel humbly grateful for the Lord’s generosity towards us, for He never ceases to take care of us with his providence and to touch our hearts in order to make us more Brothers. 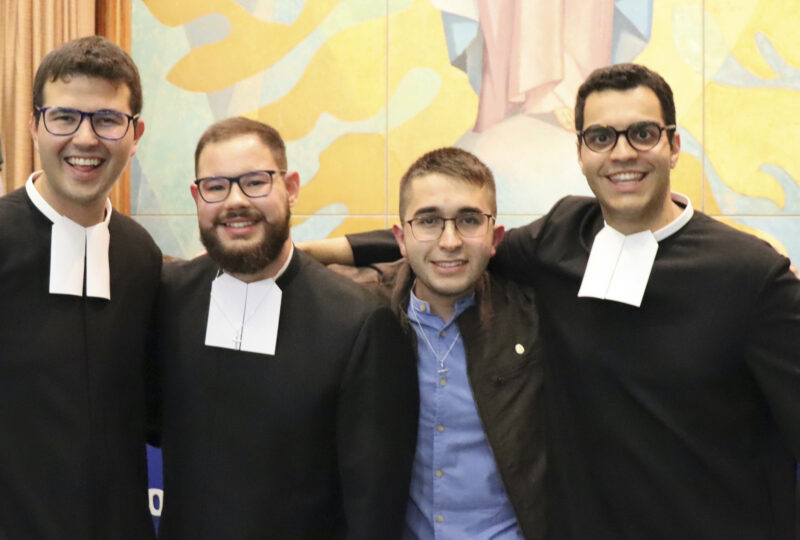