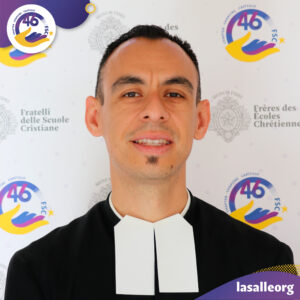 Brother Chris Patino is a member of the District of San Francisco New Orleans (SFNO) in the Lasallian Region of North America (RELAN). He graduated from Cathedral High School in Los Angeles, California, and holds a bachelor’s degree from the University of Arizona in Tucson and a master’s degree in Pastoral Studies from Loyola University in Chicago, Illinois. He received the Brothers’ habit in 2007 and made his final vows in 2013. Brother Chris began his teaching career in 2004 as an aspiring Brother and founding faculty member at San Miguel High School in Tucson, Arizona, and later served at his alma mater, Cathedral High School. He was also instrumental in founding the Lasallians Without Borders Initiative of the SFNO and Mexico Norte Districts. In 2015, Brother Chris was appointed Director of Vocations Ministry for SFNO District. In this role, he has been an active and influential in numerous national religious vocations organisations and events.