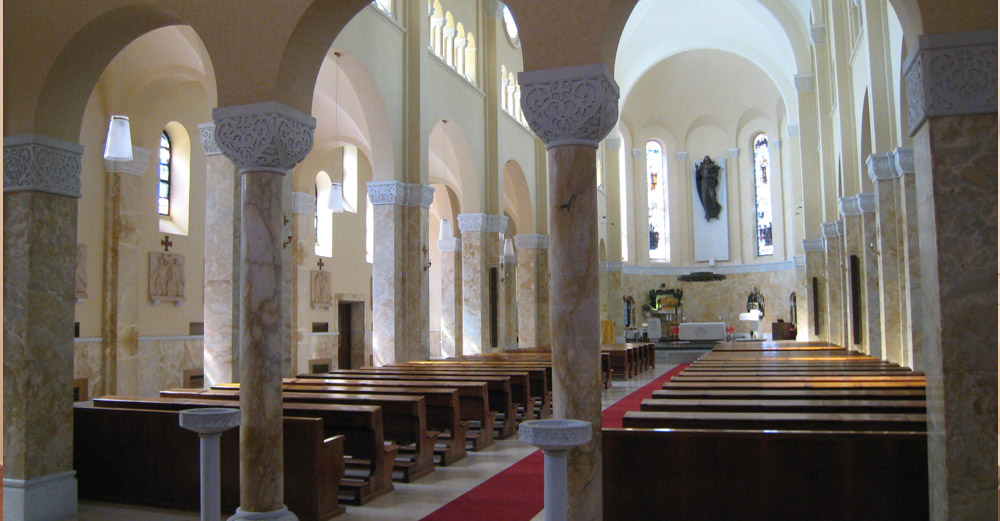 The great chapel in the Generalate was opened for liturgical worship on January the 6th 1937. Initially it was dedicated to St Joseph, Patron and Protector of the Institute, and it was designed to receive the relics of the Founder which were transferred there on January the 25th 1937. The reliquary was originally placed beneath a marble tablet under the altar in one of the four side chapels.

The sanctuary has undergone enlargements and transformations. In 1947/48, two large semi-circular side chapels were added, and the relics were placed in one of these to give them more prominence. Today, that chapel is the Chapel of the Martyrs, and the relics are now located in the apse of the church.

Today, that chapel is the Chapel of the Martyrs, and the relics are now located in the apse of the church.

Subsequently, the two semi-circular chapels were embellished with the addition of stained glass windows. The first chapel portrays the martyrdom of Saint Salomon Leclercq and other Brothers who gave their lives for the faith. In the second chapel there is a statue of the Blessed Virgin and Child and statues of Don Bosco, founder of the Salesians who was inspired by De La Salle, and of Saint Marie-Madeleine Postel, foundress of the Sisters of the Christian Schools. Around the cornice there are stained glass representations of beatified Brothers.

In addition, the Sanctuary has stained glass windows illustrating the life of the Founder and others dedicated to Brothers declared Venerable and Servants of God.

There are four side altars which are dedicated respectively to:

Finally, mention must be made of the great organ at the back of the church and of the beautiful crucifix above the small altar dedicated to the deceased Brothers who have worked in the Generalate.