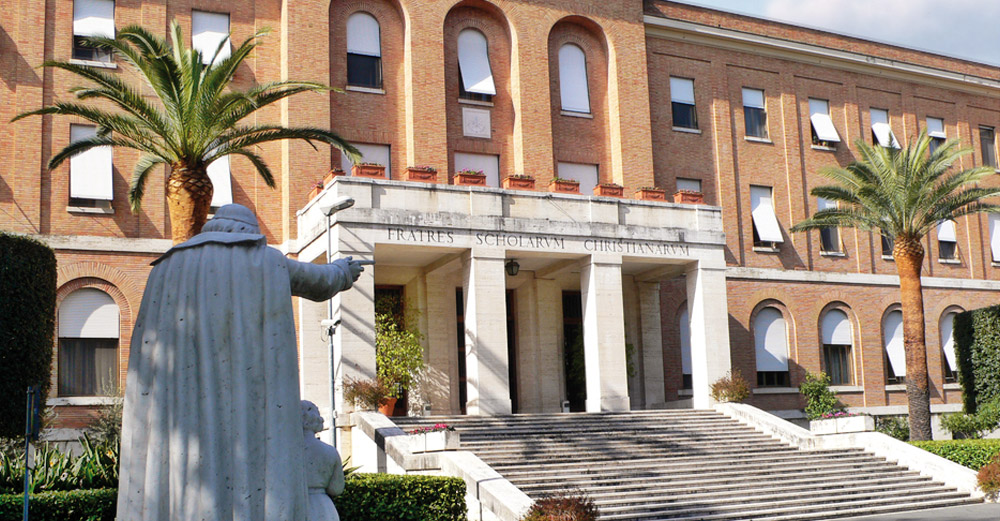 The Generalate of the Brothers of the Christian Schools is the residence of the Superior General and his Council. It is here that the central government and the General Services of the Institute are located.

From the 17th century to the 19th, the centre of the Institute was situated in France (Rouen, Lyons, Paris). At the start of the 20th century, it was transferred to Belgium (Lembecq-les Hall), and it has been in Rome since 1937.

The centrepiece of the complex is the Sanctuary of St Jean-Baptiste de La Salle, which houses the Founder’s Relics (translated here in 1937) and also those of other Lasallian Saints.

In addition to the Sanctuary, the Generalate contains a Museum, and it has a variety of meeting rooms with an Aula Magna recently remodelled, the archives and a library containing volumes that go back to the founding of the Institute.

In view of the precious nature of the material preserved in the library and the archives, they were officially declared in 2016 as being ‘of exceptional historical interest’ by the Italian Ministry for Cultural Heritage.

The Institute’s services are also supported by the personnel/statistics office and the bookstore.

The Generalate also accommodates CBIS Global and the Casa per Ferie La Salle.

In 1941, during the Second World War, the Generalate became the San Giuseppe Hospital of the Italian Army, and in April of that year it set up the first centre for war-wounded under the name of Principessa di Piemonte.

During that period, visits were made by various illustrious personages including Vittorio Emanuele, Umberto and Maria José di Savoia, not forgetting Benito Mussolini in June 1941.

In October 1943, the Holy See placed the Generalate under its protection, safeguarding it from any commandeering or requisitioning.

In January 1944, it came under German occupation as a military hospital, while functioning at the same time as a Novitiate and Juniorate (seeking refuge from Albano). Subsequently, when the German troops had retreated, the house became a military hospital for British troops.

At the end of the war, on May the 11th 1945, the house finally reverted to the possession of the Brothers of the Christian Schools and as the Maison Saint Joseph became their Mother House.

In 1946 normal activities were resumed, starting with a General Chapter. There followed the reception of pilgrims for the Holy Year of 1950 and the consecration of the chapel of St Jean-Baptiste de La Salle in 1951.

The year 1957 marked the opening of the Jesus Magister Institute, a centre for studies affiliated to the Pontificia Università Lateranense. The De La Salle Guadalupana Sisters arrived in the same year to help with work in the Generalate.

It was also at that time that part of the land was expropriated to construct the Circonvallazione Cornelia, so that the Scuola La Salle was moved closer to the Generalate. Work on the new school building began in 1964.

In March 1979, Mother Teresa of Calcutta visited the Generalate to give a talk on the importance of the Brothers’ Vocation. She addressed those participating in the session of the CIL (International Lasallian Centre) which had replaced the Second Novitiate.

The new Sanctuary was inaugurated in 1980, and in 1981 the Founder’s Room became the Museum. In that same year, the house welcomed a visit by Pope John Paul II.

Photos of the Generalate