Fratelli project – The community arrives to begin in Maicao 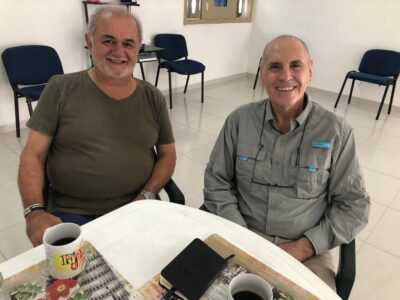 The Fratelli Project was initiated in 2016 by the Congregations of the Brothers of the Christian Schools (De La Salle) and the Marist Brothers to address emerging and urgent needs of the most vulnerable, at-risk children and young people. It mainly serves migrant children displaced by war. The communities involved in the project are inter-congregational and intercultural.

In Lebanon, the project is based in Rmeileh, Sidon, and the community is composed of 4 Brothers (2 Marist and 2 La Salle).

We reproduce below the words of the members of the new community of the Fratelli Project, Brothers Mike and Nestor.

“The Fratelli community in Maicao, a small town in the north of Colombia and next to the border with Venezuela, was born on 19 September 2022. At 16:07 hours, to be exact. We began our time together as a community with a fraternal hug full of hope, at the front door of the house”.

“Over the last few months, a support team made up of lay and religious Lasallians and Colombian Marists took on the task of locating the site of the community; they also made the necessary arrangements to formalise the leasing of the house and attend to the repairs, improvements, cleaning and painting of the premises”.

“Thanks to work done by the Marist Province of Norandina prior to our arrival and the support of the staff of the province and their solidarity network “Hearts that know no Bounds”, Brothers Nestor and Mike were able to take their first steps as a community”.

“Thanks also to the generosity of the Lasallian Province of Colombia and the Marist Province of Norandina, we have been able to acquire the furniture we need for our home and work, connections to wifi, and resources for food and transport”.

“This week we have been focusing a lot on the community. Next week will see the start of our conversations, reflections and serious discussions within and outside the community. The time has come to listen and to allow the needs of migrant groups in this region to speak to us.

Along with growing in a brotherly and compassionate spirituality and a deep and inclusive community life, we are also faced with the challenge of making the Project’s dream come true: as a community attend to the needs of Venezuelan migrant children and young people who have settled in the region known as Paraguachón, in the department of Guajira, in Colombia”.