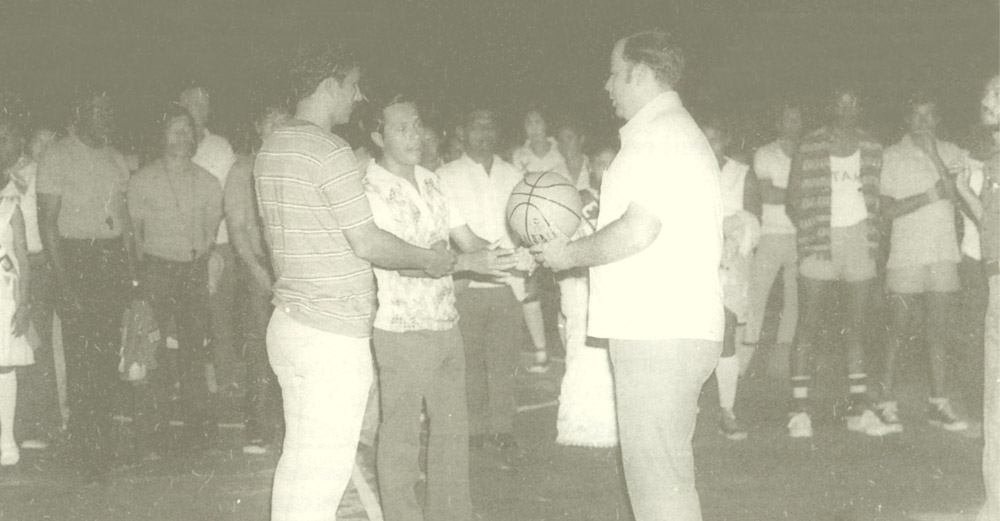 This Brother of the Christian Schools was martyred on February 13, 1982, at the age of 37, in Huehuetenango, Guatemala.

Brother James was born into a family of farmers near Stevens Point, Wisconsin, USA, on September 21, 1944. He attended grammar school and then went to Pacelli High School in the city of Stevens Point, where he met the Brothers for the first time. In September 1959 he entered the Juniorate in the state of Missouri. After three years there, he was admitted into the Postulancy program and then entered the Novitiate in August 1962, when he took the habit of the Brothers and the religious name Brother Leo William. Later, like so many other Brothers, he went back to using his baptismal name.

He was assigned to Cretin High School in Saint Paul, Minnesota for three years. There, besides teaching classes in Spanish, English and Religion, he supervised school maintenance and he coached American-style football.

In August 1960 after making perpetual vows, he was sent to Bluefields, Nicaragua. He taught there until he was assigned to Puerto Cabezas, Nicaragua in 1974, where he was the Director. Under his leadership the school population grew from 300 to 800 students. Brother Santiago also accepted the task of supervising the construction of ten new rural schools. His religious superiors ordered him to leave Nicaragua in July 1979 during the time of the Sandinista revolution. It was feared that since he worked for the Somoza government he might be at risk. For that reason he returned to the United States and again taught at Cretin High School in the fall of 1979 and he participated in the Sangre de Cristo renewal program in the state of New Mexico in 1980.

He was sent again to mission territory, this time to Guatemala, in January 1981. He taught at the secondary school in Huehuetenango and he also worked at the Indian Center, where young indigenous Mayans from rural areas studied and trained in agriculture.

In the afternoon of February 13, 1982, he was shot several times by three hooded men and he died instantly. Attempts to identify the assassins were unsuccessful. After funeral rites in Guatemala and in Saint Paul, Minnesota, he was buried in the parish cemetery in Polonia, Wisconsin.

His character and personality
His own writings and other declarations pertaining to him, before and after his death, show us his character and personality. Before leaving Pacelli High School to go to the Juniorate, the Brothers that knew him wrote that “he was very generous, pious, honest, docile and that he was very well-ordered and tidy; he did not smoke, he received the sacraments weekly, he got along well with his classmates; he devoted two and one-half hours per week to house chores.”

One of his professors from the Scholasticate portrays him enthusiastically as being “attractive with an open and sociable personality, likeable, completely genuine; people were captivated by his simplicity: he was very intelligent and also very simple.” Community notes in the discussion that preceded his perpetual profession spoke of his generosity, positive influence and living desire to work in the missions. A Brother who was his Director in the Scholasticate and at Cretin High School, his first community, recalled him as “an intelligent person, although not an intellectual, jovial, easy to relate with, preferring physical work to sports, with a deep faith and love for his religious vocation, but with a certain tendency to come late to class and community prayers.”

While he was still in Nicaragua, his old desire to work on the missions was obvious. From Nicaragua he wrote about the satisfaction he felt while working for the very poor. Responding to the question if he felt afraid about the shootings that were taking place around him, he wrote: “Are you kidding? I never thought I could pray with such fervor when I go to bed.” In one of his last letters before he died, he showed that he was aware of the situation in Guatemala and the possible personal consequences for him. He wrote in January 1982: “I am personally weary of violence, but I continue to feel a strong commitment to the suffering poor of Central America. … the Church is being persecuted because of its option for the poor. Aware of numerous dangers and difficulties, we continue working with faith and hope and trusting in God’s Providence.” He went on to write: “I have been a Brother of the Christian Schools for nearly 20 years now, and commitment to my vocation grows steadily stronger in my work in Central America. I pray to God for the grace and strength to serve Him faithfully among the poor and oppressed in Guatemala. I place my life in His Providence. I place my trust in Him.” He died one month after writing those words.

Each year since the assassination of Brother James Miller in Guatemala, the Justice and Peace Commission of the Diocese of La Crosse, Wisconsin, organizes, in collaboration with the Brothers of the Christian Schools of the Midwest District, on the occasion of the anniversary of his death, a ceremony for his brothers, sisters and other relatives. In this way the wish of Brother Cyril Litecky, the Visitor at the time of Brother James’ death, is fulfilled. Brother Cyril wrote shortly after his death that it is important not to forget Brother James Miller. “That for which he lived and died is the Gospel message of freedom, peace, justice and truth.”

The “Brother James Miller Fund,” established after his death, helps to carry on the work that he did for the poor and oppressed and annually funds are distributed throughout the world for projects that are aimed directly in favor of the poor and those who promote structural change in favor of social justice.

Following the artistic presentation in honor of Blessed Brother James Millar, we now have a musical tribute. It is a composition by the well-known Lasallian composer, Brother Mario Chiarapini. It opens with a solemn, four bar organ introduction before moving into a solo expressing the joy of a man “faithful in trials” who will “receive the crown of life”. The refrain follows, initially in almost whispered unison before resolving into four voices with a wide-ranging melody.

The translations to the other languages were made by Brother John Guasconi (English), Frère Nicolas Capelle (French) and Hermano José Martínez (Spanish).