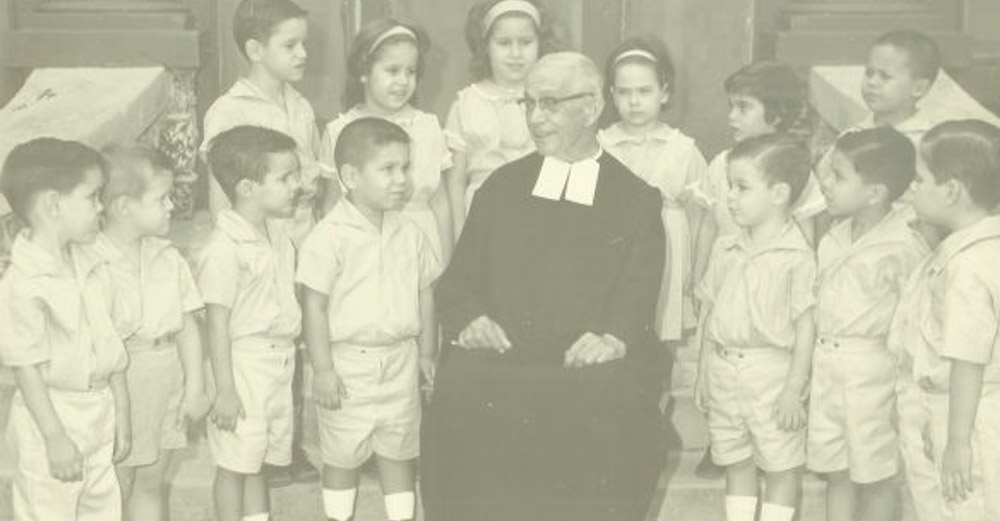 He was born in Onzillon (France) on September 17th 1885. He had just been in the Congregation of the Brothers for a short time when, because of the religious persecution at the beginning of the 2oth Century in France, he was obliged to go into exile.

Cuba was the country he chose and remained there from 1905 till 1961, when another persecution obliged him to take on a second and more bitter exile. In Cuba he adapted in a marvelous manner, meeting an enthusiastic welcome for his many apostolic initiatives.

He was in fact founder of:
– the La Salle Association in 1919;
– the male and female Federations of Cuban Catholic Youth;
– the Catholic University Residence in 1946;
– the Catholic Family Movement in 1953.

From 1961 till his death 6 years later, he reorganized various associations among the exiled Cubans of New York, Miami and Puerto Rico. It was in San Jaun de Puerto Rico that he died on April 16th 1966. Of all these things and of others there remains still his daily sanctity – that is to say the fact of having transformed a simple existence, linked to the place and to the simple repetition of ordinary gestures and actions, into a continual gift of himself to God and to others. “Sanctity does not consist in extraordinary things but in ordinary things done in an extraordinary way”; these are the authorized words with which Pius XI, as we have already recorded, raised to the rank of heroic the “terrible cotidiano”.

This prayer might be said as part of a novena to ask for grace through the intercession Of the Servant of God Br.Victorino, great apostle of the School and Youth.

This prayer might be said as part of a novena to ask for grace through the intercession Of the Servant of God Br.Victorino, great apostle of the School and Youth.

Dear God, you who have promised to raise the humble and to make shine as stars for eternity, those who teach justice to many, deign to glorify your Servant Brother Victorino, tireless apostle of childhood and youth, and make his name shine among your Saints.

Multiply your graces in favour of the faithful who beseech you, remembering the virtue which he practiced on earth.

One day may we see the Holy Church honour his memory and propose him as a new model   to imitate and as one more protector who will aid us in our toil and suffering and help us to attain the blessings of heaven.

Our Father, Hail Mary, Glory…
(With the necessary authorization – For private use)