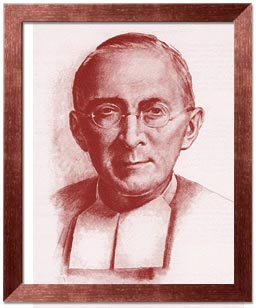 Brief biography
Adolphe Chatillon was born in Nicolet, Quebec, on October 31st 1871. He grew up under convinced Christian parents: Octave Hardy-Chatillon and Alma Alexandre. In addition to Adolphe, a Brother of the Christian Schools, this family gave to the Church Edmond, a secular priest and Robert, an Oblate of Mary Immaculate. Edouard, husband of J.Desaulniers, founded a family of 5 children and Octavie, married to Honorius Ricard, a doctor, also brought up a happy family.

Becoming an orphan at the age of nine, Adolphe was sent to a boarding school at Baie-du-Febvre and later to Yamachiche. In February 1884,when he was 13, he presented himself at the Juniorate in Montreal to become a Brother there. On July 26th 1887, he began his novitiate under the name of Br.Theophanius-Leo.

A concerned teacher
The talents and the devotion of the young teacher did not take long to attract the attention of his Superiors. He strove to make his teaching as lively as possible. He stayed late to help those who had some difficulties. He took special care to make the teaching of catechism captivating.

His love of the young
At Lachine, in 1904, called upon to replace the Director, who enjoyed great influence both with the teaching staff and the pupils, his tact triumphed in this difficult situation.

In 1907, he received a mandate to become Director of Sainte-Cunégonde, in Montreal. From the beginning of the year he showed enthusiasm and devotion for the young. His simplicity and his affability won over all hearts. Goodness seems to have been the inclination of his great heart. He had taken as his motto: “Make happy in order to make better”.

Three months after his arrival at Sainte-Cunégonde, he was floored by a serious illness; everyone thought he was going to die. Intense prayer by those around him brought him back to better health but he had to move away form those he cherished and submit to a long convalescence.

The formation of young Religious
During this convalescence, Br.Theophanius devoted his time to giving some singing lesson and working on the liturgy with the novices. Did he realize that in accomplishing this voluntary work, he was preparing himself for becoming Director of Novices four years later? “My mission with these young men is to help them in their formation; I am here to show them how to do it: my role is to lead them to act by themselves and without help as soon as possible” “In the course of your novitiate” he would say to them,” a strong idea, filled with all the energy of your soul, should dominate you; here it is: I wish to be the friend of Jesus, Mary’s child and the hero of souls”. There was perfect harmony between his words and his actions. This work of religious formator was by no means a rest. He devoted twelve consecutive years to it (1912-1923), to which one might add his years as Sub-Director from 1908 to 1912. In 1923, he was called upon to visit the Houses of Formation of North America, work which was made heavier by the length of the journeys and the subdued attacks of the illness which would one day take him away.

An edifying patient
In November 1928, Br.Theophanius took part in the General Chapter of his Order, as President of the Commission in charge of studying the observance of the Rule. Because of cancer of the intestines he suffer greatly from exhaustion. He was taken to Paris fro a serious operation which did not produce the expected result. At the beginning of March 1929, he felt up to risking the return by boat, along with a good nurse, to get back to his life surroundings, “Mont-De-La-Salle”. During all the time that his illness lasted, he was a prayerful, smiling and courageous patient. People came to his bedside as if on pilgrimage, so much so that his room was a sort of oratory from which one emerged better. He died peacefully surrounded by those he loved on Sunday April 28th 1929.

His influence
Since the death of Br.Theophanius, several persons have been the object of his favours, some of which appear really remarkable. Br.Theophanius lived more than half his life with youth: all, young or not, can hope to be the happy beneficiaries of his credit with God. The diocesan process with a view to introducing his Cause to Rome, ended on March 31st 1990. The “Positio”, a document which serves to show the heroicity of his virtues, is now ready to be presented to the Congregatin of the Saints. May God obtain, through the intercession of his servant Theophanius-Leo Chatillon, a miracle which will hasten his Beatification.
(Br. Gerard Champagne, FSC)

Prayer to ask for the Beatification of the Servant of God, Br.Adolphe Chatillon
“Eternal and All-Powerful God, who has a marked predilection for the humble and the young, favourably accept the prayers which we address to You for the glorification of your Servant Adolphe Cahtillon. If it is Your wish and your greater glory, grant us the favour we request through the intercession {mention intention} and deign to hasten the day when we will be allowed to publicly honour this apostle of the Heart of Jesus and this great devotee of the Virgin Mary.
(Authorisation of Mgr. Paul Gregoire, Archbishop of Montreal. N.P. 15/1987)

Any persons who receive these graces, favours or cures through the intercession of Br.Theophanus-Leo are asked to make them known to:
Br.Yvon Larente, Vice-Postulator
5714, Avenue Darlington
Montreal (Quebec) H3S 2H7

You can alos obtain from the same address, pictures, brochures or bulletins concerning Br.Theophanius Leo.