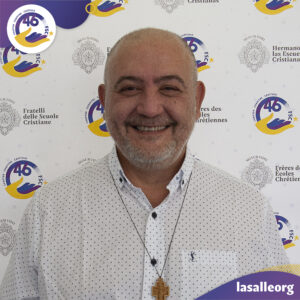 Brother Ramón Martín Digilio was born in Cordoba (Argentina) on 27 November 1965. At the end of primary school, he entered the Aspirancy in the same school. When he reached the third year of secondary school, he moved to the La Salle Institute in Florida, near Buenos Aires, to continue his aspirant formation in the aspirancy. There he also did his postulancy in 1983. He entered the novitiate in Villa Warcalde, Cordoba, in 1984 and made his first profession in 1985. His school studies enabled him to qualify as a primary school teacher.

His first community was the school in Argüello, where he worked as a teacher for three years and then as secondary school catechist and was in charge of discipline for another two years. At the same time, he studied and earned the title of professor of Religious Sciences.

In 1993 he entered the scholasticate and postulancy community of González Catán, where he spent five years. In 1998 he moved to the Novitiate as Director.

He was one of the founding groups and first president of the Federation of Religious Educational Associations of Argentina.

He was elected delegate to the General Chapter of 2022, which he attended as Director General of Colegio La Salle de Argüello, where he had already implemented an ambitious pedagogical and pastoral renewal plan.