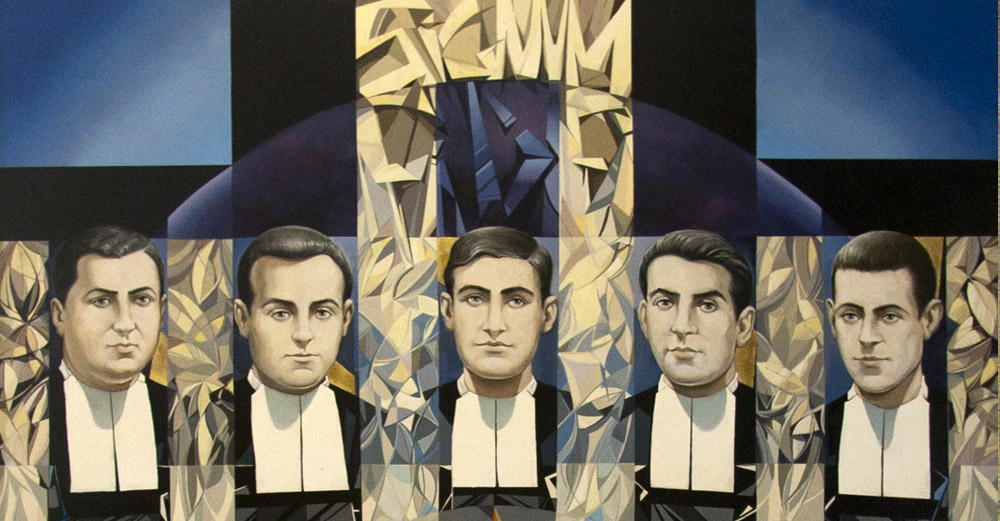 The five blessed to whom we dedicate these pages were members of the Institute of the Brothers of the Christian Schools. Their only concern was to follow Jesus in the vocation to which he had called them: to gain salvation by educating young people, teaching them to live as Christians.

Martyrs are a sign of the Church, the Body of Christ, which continues being persecuted and condemned to death in her members, but these martyrs keep their sights fixed on the glorious dawn of the resurrection.

This is the lesson that the Martyrs give to us, yesterday and today. We should be ready to imitate their generosity.

Even though they knew that affirming their state as religious would lead them to death, they did not hesitate in admitting their faith in Jesus and the fact that they belonged to the Institute of the Brothers of the Christian Schools.

These five Brothers, now newly beatified, had no other job than that of following Jesus in the vocation to which He had called them: To bring salvation to the young and children, that is to say, to educate young people and children entirely in a Christian manner, so that they might achieve their full potential as human beings and as Christians.

With their beatification, their names will increase the number of saints and blessed among the Lasallian world. Beginning with St. John Baptist de La Salle, our Founder, and then later with Brother Salomon Leclerq, the first Brother martyr during the French Revolution, they ensure that fidelity to the Lord along the path of the integrated education of young men and women, boys and girls, constitutes a Gospel journey.

Young person, teacher, Lasallian partner, parent,  this message invites us also to devote our lives to the Kingdom, based on our chosen lifestyles and the professional activities we carry out. The cause of the Kingdom compels our lives to acquire the religious dimension which is a source for happiness and continued strength, even when facing life’s most difficult tests.

Along with our newly beatified Lasallians we remember many other martyrs whose lives were violently snatched away for the sole reason that they were proclaimers of Jesus Christ. We recall our martyrs from France, Mexico, the Philippines, Poland, Vietnam, Guatemala, Colombia, and Spain. We also venerate the memory of so many Brothers and Lasallian partners who devoted their lives in a gradual way, day after day, bit by bit like a piece of chalk on the blackboard in the anonymity of daily fidelity.

And the familiar voice of our Founder resounds in our ears and in our heart, when he tells us: “The only thanks you should expect for instructing children, especially the poor, is injury, insult, calumny, persecution, and even death. This is the recompense of the saints and of apostolic men, as it was for Our Lord Jesus Christ.” (Meditation 155.3)